We are in a time of momentous events when history is being made daily. Since the last solar eclipse on October 23rd. where the Sun/Moon and Venus were all combust in Scorpio and Mars was at the time Out of Bounds in Sagittarius, there have been unusual and strange occurrences. Many of those happenings have been sudden destructive like the unmanned NASA-contracted rocket exploded early Tuesday evening Speaking of historical events, here we are at Game Six of the 2014 World Series
The Giants lead the series 3 games to 2 for the Royals and have the momentum to win their 3rd World Series in Five Years
This is one game that won't be dull since Mars now in restrained and exalted Capricorn is in positive alignments to the Sun/Venus/Saturn all in passionate Scorpio.
Many factors are at play but with Scorpio, it will be the total intensity of play which will decide the winner.
The Royals are hungry but and less experienced with post season play
Let's look at a chart set for the first pitch in Kansas City @ 7:07 PM CDT
Taurus is rising where the ascendant usually represents the home team - Kansas City Royals
Scorpio is on the cusp of the 7th. in Scorpio along with Saturn which would represent the SF Giants
Saturn is a huge detriment for the Giants which could relate to loosing this came and Peavy's bruised thumb.
(Note that Ceres and Vesta are intercepted in fiery Sagittarius in the 7th. for the Giants and could mean a surge in later innings )
Venus ruler of this chart sits in the sixth house near the Sun in Scorpio which is an advantage for the Royals

The starting pitcher for the Royals, Yordano “Ace” Ventura Hernandez born June 3, 1991) whose fast ball is notorious and has been clocked at 102 mph. Yordano has a natal Mars-Jupiter conjunct in Leo which is a big advantage with Leo on the 5th. house cusp.
Yet in Yordano's chart Mars- Jupiter are also opposing Saturn can also make mistakes
and allow the long ball from one of the giants heavy hitters. 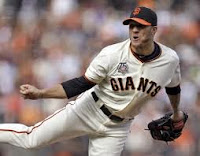 Jake Peavy is 10 years older than Ace Ventura (born May 31, 1981) who has an awesome cutter, slider and mixes things up when throwing
is a steady pitcher
who can surpirse batters with Mars in fixed Taurus opposing Uranus
Peavy also has Mercury and Venus Out of Bounds in Cancer and Gemini respectively which could mean some errors or mistakes. When we look at how the Giants play the game we find the 11th house (counted as 5th from the 7th) we see Aquarius @ 29 degrees but Neptune (confusion/uncertainty) is intercepted in Pisces. Not a positive sign.
Posted by Art Gianfermo at 6:40 PM