Eclipse on the Mid-Point of the 3rd. Night of the Universal Underwold

Volcanic tinged Moon with a Shade of Blood
on the MidPoint of the 3rd. Night of the Universal Underworld

This Total Lunar Eclipse @ 25 Sagittarius (1:14 PM PDT) and will be particularly potent and wild with a Grand Mutable Cross. The chart below shows S Node-Sun-Mercury conjunction at the top or Mid-Heaven most interactive with the public.
This will be fed by the media and their hyper attempts to distract and mollify the general public. The Moon and the North Node of future destiny will be in the IC
or home place for the West Coast revealing a restless, energetic yet optimistic nature

Virgo will be rising with Juno in charts set for the West Coast (San Francisco)
and opposing Ceres in Pisces crossed by Moon-N Node opposing Sun-Mercury-S Node all in Gemini.
With all these frequently changeable signs crossing, it will be hard to keep track of the erratic, mercurial strange and fluctuating changes which will be happening.
This 25th degree of the Sagittarian Moon has a manic quality filled with a kind of creative frenzy and a wonderful visionary impulse.
Sabian Symbol: "A chubby boy on a hobbyhorse imagines himself flying to a multi-colored candyland"

We are actively seeking a new, more exciting vision for our world where excess is at odds with controlled moderation.
Expect some extreme mood swings with the developing mutable cross.

The best locations to view the eclipse will be in the northernmost region of the “entire-eclipse zone” in central Asia, as well as Eastern Europe and northeastern Africa.
Those in South America, Western Africa and Europe will view the eclipse at moon rise, while observers in Eastern Asia and Australia will see the eclipse as the moon sets.

Note that this is one of the darkest eclipses ever, second only to the total lunar eclipse on July 16, 2000. From the video above, we see that this eclipse
lasted a full 100 minutes offering beautiful contrasts of light and dark.

As I indicated, the ruler of this 18 day Night is Mictlantecuhtli, Lord of the Dead.
Since this "night" began on June 7th, there have been a number of themes around death whether physical emotional, political or spiritual - Per example

Also with Neptune-Chiron and Ceres in Pisces, religious themes of loss too with Harold Camping the Rapture Preacher Suffers Stroke, Now in Hospital

Now that Neptune is transiting in it's home sign Pisces and retrograde, an "aha" moment about arrive concerning the true nature of death/rebirth and the continuum of life. Also on June 16th. Mercury enters psychic Cancer setting up a series of powerful cardinal squares which will open portals more etheric places.

Most importantly the combination of this eclipse and the accelerated 3rd Night will help many people cast off their blinders (as Carl Calleman describes) and began to see the truth of a world wide oneness revolution and subsequent unity.
In the above article, Calleman explains that the "oneness revolution is now spreading notably to a few European nations such as Portugal, Greece and Spain and North Africa." He goes on to emphasize that the Ninth wave will not generate the same process of change towards oneness and people in the far West and far East (China). The process of bringing about a collective oneness revolution is not going to end on Oct. 28, 2011 but will by then add new dimensional awareness and telepathic abilities for all of us.

3rd Day of the 3rd Night - Power Outages, Heat Bursts and Our Journey Into the Dark

In my last entry I spoke about the start of 3rd. Night of the Universal Underworld
on June 7th. and Mictlantecuhtli, the Lord of the Dead who is in charge.
Well it looks like his consort Mictecacihuatl has joined him.
On June 7th a sensationalized story appeared about a mass grave filled with 25 to 30 bodies in East Texas.
Then a few hours later it was a hoax framed by a psychic tip gone awry and cadaver-sniffing dogs who turned up zip. In Texas, Mass Grave Report Leads to Drama but No Bodies
Earlier on the same day the Sun erupted into a solar flare so strong that it threatens to disrupt Earth communications and power.
Today, Thursday, June we had a major power outage in Detroit which is going to extend into Friday. In essence there is a theme developing which synchronizes with Saturn stationing direct and opposing Uranus in Aries this afternoon. According to Aztec mythology, when a person died he was interred with material goods (similar to the Egyptians). These possesions were carried on the long and dangerous journey to the underworld. Upon arrival in Mictlan these personal treasures were offered to Mictlantecuhtli and his wife.


The image below comes from Crystallinks.com describing the many Aztec Gods and Goddesses. The 13 days/Heavens of sacred calendar were associated with a deity and an evolutionary symbol. As Calleman says in The Mayan Calendar and Transformation of Consciousness, "since the names used by the Maya for the deities ruling these heavens are no longer known to us, 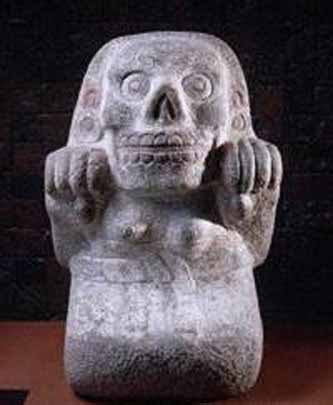 In Aztec mythology, Mictecacihuatl was the Queen of Mictlan, the underworld, and wife of Mictlantecuhtli. Her purpose is to keep watch over the bones of the dead.

The frequency is increasing with each day/night transition as is the power expended. Strong Heat Burst felt across Wichita Metro and Surrounding Areas This burst of heat was noticed at 12:42 AM CDT with Aquarius
rising with a close square to Mars (heat) now Void of Course in Taurus. Adding to this recipe of unexpected temperature rise is of course the chart's ruler Uranus not only TSQ Saturn-Pluto but contraparallel the Moon and Saturn by declination.
"An unusual heat burst occurred shortly after midnight on June 9, 2011, across the Wichita area. The temperature jumped some 15 to 20 degrees in a matter of 15 to 20 minutes, rising from the low to mid 80s to around 102 degrees. The sudden rise in the thermometer was accompanied by a downburst of winds that gusted to near 60 mph in some locations.:
Posted by Art Gianfermo at 10:30 PM

The 3rd. Night Begins on June 7th - Ruled by Mictlantecuhtli - God of Death,Transformation and Rebirth

Tomorrow a new Lord in the Aztec mythology takes charge with the 3rd. Night of the Universal Underworld to commence on June 7th. and finally conclude on June 24th.
Mictlantecuhtli, the Lord of the Dead takes over from Tlazolteotl: The Goddess of Filth, Purification and also a patroness of adulterers. With the entire acceleration of all frequencies on all levels, we always get a preview in the last few days of every 18 day period.
The 3rd. day relating to "the sprouting of new energies" ended with some big
bangs and birth pangs for Pacha Mama including volcanic eruptions. News from Chile
yesterday: 3,500 evacuate as volcano erupts in southern Chile
Authorities say a rift more than six miles long and three miles across was torn in the earth's crust about 2½ miles from the peak originally thought to be erupting.


Keeping in line with predictions of even larger earth changes especially quakes during this period,
the 3rd. Night begins with the Mayan Day Sign 13 Caban/Earth. Galactic Tone 13 is about reaching for the next level or ascending.
Caban also represented the movement or motion of the earth as in the form of an earthquake orthe surge of heart blood or chi as in the human body. Another bit of foreshadowing for this new period was the admission by Japan that 3 nuclear reactors melted down after quake.
The nuclear group's new evaluation, released Monday, goes further than previous statements in describing the extent of the damage caused by an earthquake and tsunami on March 11. Death and dead persons crossing over could be a real theme
as this period ramps up. In fact according to Aztec myths,
a person died, they were interred with grave goods, which they carried with them on the long and dangerous journey to the underworld. Upon arrival in Mictlan these goods were offered to Mictlantecuhtli and his wife.

So Tuesday, June 7th. we move into a time when Mictlantecuhtli one of the most prominent of several gods and goddesses of death and the underworld including Chalmecatl. Mictlantecuhtli's wife and partner is known as Mictecacihuatl,[4] and together they were said to dwell in a windowless house in Mictlan. Mictlantecuhtli is truly a shadow deity, who was associated with owls, bats and spiders the eleventh hour, and the northern compass direction, known as Mictlampa, the region of death. Before we forget Mictlantecuhtli has a correspondence with a Mayan death God known as Metnal or Xibalba. Kisin is another name of the death god among the Lacandons as is "prince of the devils" Hunhau. Mayan tradition involving the Lord of the Dead tells how he burns the souls of evildoers, transforms the souls of certain evildoers into his 'domestic animals and hunts for the spider monkey doubles of men destined to die.
Mictlantecuhtli and his wife were the opposites and compliments of Ometecuhtli and Omecihuatl, the givers of life.

In the Aztec world, skeletal imagery was a symbol of fertility, health and abundance, alluding to the close symbolic links between death and life
In the Aztec codices Mictlantecuhtli is often depicted with his skeletal jaw open to receive the stars that descend into him during the daytime Expect this to be a Time of Creating the Flow in the evolutionary process.
June the 15th is the ninth day of a 18 day Period and so far representing a midpoint aligned with a Total Lunar Eclipse. This lunar eclipse @ 25 Sagittarius
conjunct the North Node opposing the Sun-Mercury in Gemini is part of a powerful
Grand Cross in mutable signs.

This eclipse (which kicks off a Full Moon on the West Coast of the US @ 1:14 PM PDT will be visible completely over Africa, and Central Asia, visible rising over South America, western Africa, and Europe, and setting over eastern Asia. In western Asia, Australia and the Philippines, the lunar eclipse will be visible just before sunrise.
Posted by Art Gianfermo at 11:39 PM